Fansipan cable car has made the road to the roof of Indochina now no longer a day of climbing, but instead helps to shorten the time to only 15 minutes. The Fansipan Sapa cable car system of Sun Group was inaugurated in early 2016 has registered two more world records for Vietnam: the world’s most modern 3-wire cable car and three-cable cable car with the difference between 2 The largest station (1410m). Fansipan cable car in Sapa starts from the valley, Muong Hoa village to the top of Fansipan with a capacity of 2000 passengers per hour, modern cabin system, each cabin can carry a maximum of 30-35 guests, designed by cable companies. World’s leading hanging Doppelmayr Garaventa, ensuring safety, withstand wind and harsh weather at altitudes higher than 3000m. This whole project is invested with a total capital of VND 4,400 billion, becoming a pride for not only Sun Group but also the pride of Vietnam as well as owning the longest modern cable car system. The world, fulfilling the dreams of everyone on the Indochinese roof, especially the elderly and the young – who are unable to climb the 2-day trekking path under extreme weather. After taking the cable car, you need to walk an additional 600 stone steps to reach Fansipan peak (Photo collection)

Sitting in the cable car from an altitude of more than 3000m, you will have the opportunity to see the scenery, clouds floating around between a vast space with only sea and clouds. With the sunny days, you can see the beautiful Muong Hoa village below, as well as see all the majestic beauty of Fansipan peak.

Landmark on the top of Indochina’s roof (Photo collected) Standing in the middle of the sea of clouds (Photo collection) The village viewed from above (Image: @therdkwanb)

Together with the modern cable car system made by the efforts and determination of an entire group (all materials must be manually transported up in extremely severe weather conditions), Related buildings such as the station or souvenir shops, restaurants are invested, elaborate meticulously detailed to visitors can get the best experience. World famous architect Bill Bensley was the one who penned the design of Sapa station with an architectural style inspired by the brocade patterns and motifs of the Northwest highland people, ensuring the construction of people integrates with customs, landscape. 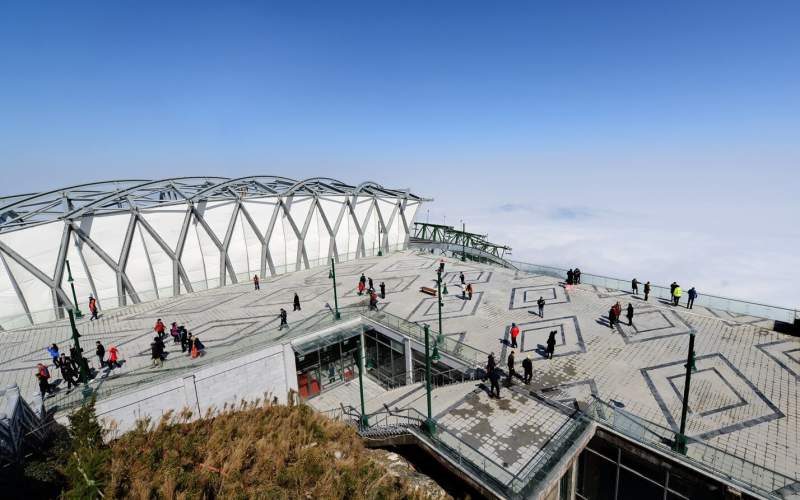 Each work item is meticulously cared for (Image: @huynhnoori)

If you want to go to Fansipan peak by cable car, you can buy tickets at the station with the price of 600,000 VND for adults and 400,000 VND for children from 1m – 1m3 tall. Free tickets for children under 1m. Each cable car cabin can accommodate from 30 to 35 people with a capacity of transporting the entire system of about 2000 guests / hour. The cable car ticket is a round-trip ticket for both return and return trips, so you should take care to keep the ticket carefully because the return ticket will be withdrawn.

Another thing is that cable car tickets can only be used during the day, so you should not buy tickets in advance if you do not have time to climb Fansipan that day. Buying a cable car ticket is quick and easy now, instead of waiting as before, so it is best to go to the station to buy a ticket directly.

– Food and services in the mountains are quite expensive, so before getting on the cable car, you need to prepare food and drink to prevent hunger or thirst.

– Do not carry bulky furniture by cable car management will not let you into the cabin.

– Should wear neat clothes, warm enough to climb. Since it’s quite cold at the top of the mountain, it’s only about 8ºC, so bring along gloves, a scarf and a warm hat.

– The distance between the steps when climbing is quite high and steep, plus the air above is quite thin, so if you go at a fast speed, it will easily cause you to drop blood pressure and feel short of breath. So on the climb you should not exert too much effort and remember to go and rest.

– Do not litter on roads affecting the landscape and the surrounding environment.

Thanks to this Fansipan cable car project, the dream of conquering the peak of not only Vietnamese people but for anyone who wants to stand on the roof of Indochina becomes simpler and easier. At the same time, it also opens up opportunities for many people, creating favorable conditions for developing regional tourism as well as improving the lives of people here.