A magical legend about Ponagar Tower in Nha Trang 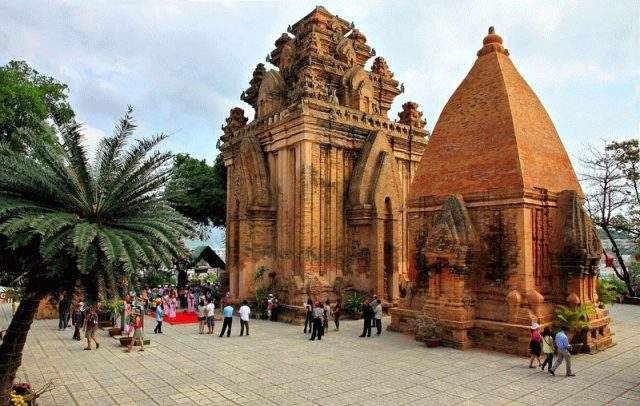 Not only is a famous tourist destination, the stories and legends about Ponagar Tower in Nha Trang have always been the subject of many tourists. Hidden behind this famous architecture are the fanciful stories of its formation, which makes people who come here and hear these stories very interested.

Nha Trang is always a favorite tourist destination. This place not only attracts tourists by its fascinating natural beauty, but also has many unique and ancient architectural works. The most outstanding is the Ponagar Tower. This work is known as a symbol of the outstanding religious culture of the people here. Not only that, this place is also in the list of the most monumental cultural and religious architectural works of the Central region of our country. 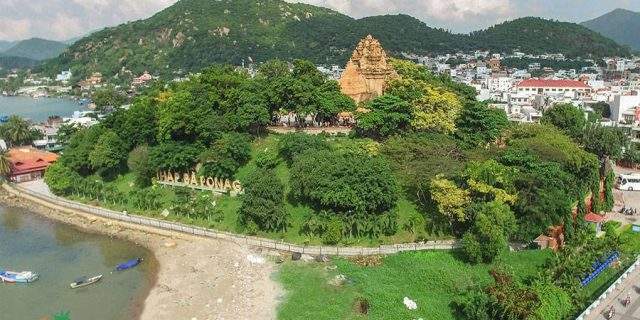 Located close to the central area in Nha Trang to the North. So visiting this place is extremely convenient. So far, this building no longer retains its inherent architectural features, but visitors can still easily see this project is divided into three distinct parts. With the first floor is also the path to the main tower with the steps. Buildings up to now no longer remain intact (Photo ST)

The second floor, also known as Mandapa, is temporarily understood as a retreat home, a guest house. Therefore, this place was chosen as a place for tourists to come here to rest, and repair clothes and offerings before making offerings. A special feature on this floor that visitors can easily see is that four large octagonal columns are built along each side of 5 large columns and 6 small columns.

Going through the two floors above, visitors will reach Ponagar Tower. Like the other Cham towers, this work is also built of red bricks, bound together by a very special binder of the Cham people but almost impossible to recognize their presence. The height of the tower is about 23m, divided into 4 floors, each of which has the same design with the main gods or mascots of the ancient Cham people. Surely when visiting this place, visitors will not be surprised at the ancient and unique beauty of this place. Do not stop there, visitors here also know more about the legend surrounding this tower.

Once upon a time, the god Poh Nagar was out in the open sea, who was created from sky clouds and sponges. One day the rising water brought people to the Yjatran River in Kauthara (Cu Huan River). Thunderstorms and strong winds rose to signal to all creatures that she was about to descend here. At that moment, the mountains, the river or the trees and all animals lowered themselves to welcome her here. After landing on the shore, she turned into magnificent and magnificent palaces. 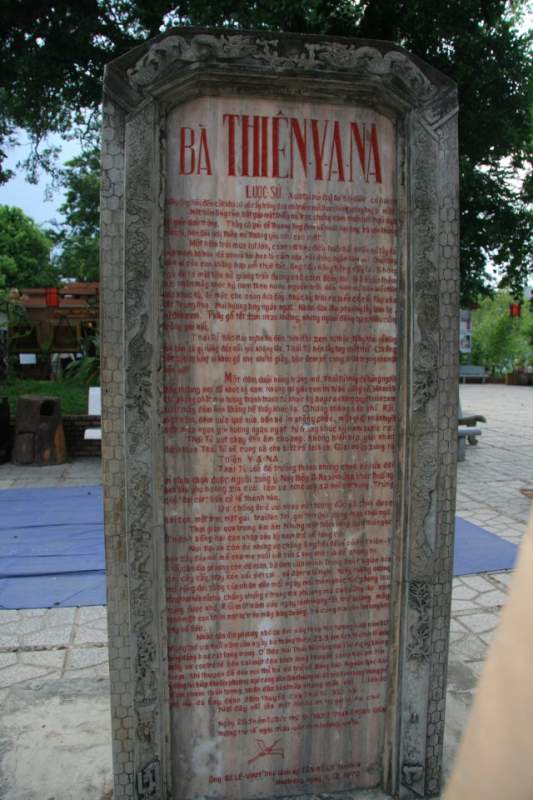 The stele records the formation of Ponagar Tower (Photo ST)

Not only possessed many transformations, she also had many husbands. In her palace, there are 97 husbands. Among them, only Mr. Po Yan Amo is the most powerful person. Although there are many husbands, but she has only 38 children, and all are girls. Later, 38 of her children became gods. Especially, only three of them are Po Bia Tikuk, Po Nogar Dara and Rarai Anaih.

In a guest record written by Phan Thanh Gian in 1857 under the reign of the 9th Emperor Tu Duc and later in 1970, sculpted by Le Vinh and Mr. Quach Tan: “When Kauthara land belonged to Vietnamese people, then the goddess Po Nagar also became a goddess of Vietnamese called Thien YA Na and her story was also Vietnamized. ” 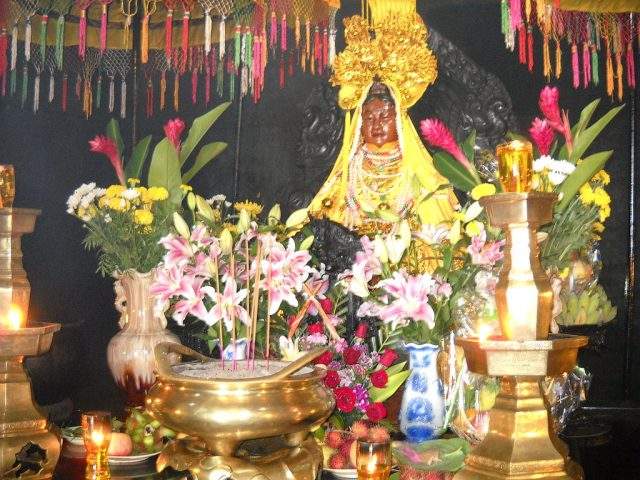 Inside the tower, worship the god Ponagar (Photo ST)

Associated with that is the story that people still tell each other about the legend of Ba Po Nagar Tower (Thien YA Na): In the old days on Dai An Mountain, there were old woodcutter couple those without children. He and his wife rely on planting melons. By season, the melon ripe he saw his melon garden had stolen some melons. After so many times he caught the thief, but was surprised by the thief is a beautiful girl, no parents. Mercy for the fate of the girl and the old man who adopted her. But grandparents did not know she was a fairy.

Some time later, the floods poured down to devastate the landscape here, making her remember the old fairy. Because of the things she gathered flowers, plants and rocks to make a rockery. When he returned, his adoptive father saw that scene and was angry that he thought such things were not suitable for women, so he scolded her. Sulked, she left and caught a male stretch floating in the middle of the river, she embarked on it and drifted to China. 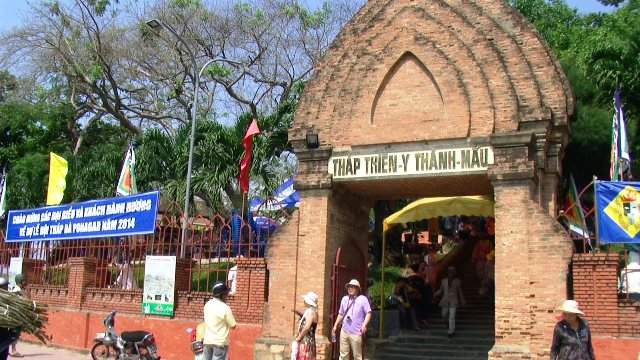 Entrance to the tower during festivals (Image ST)

When she was in the shape of a male song drifting to China, the people here flocked to see it because of its sweet smell. A lot of people want to take home but can’t carry it. Listening to different stories from the public, the Crown Prince of this country came down and lifted the log to take home. One day, the Crown Prince discovered that a strange stranger in the palace was surprised and discovered the girl hiding in the log. She proclaimed herself to the Crown Prince Thien YA Na, then sat and told him about her story. Loving the girl, the next day the Crown Prince asked the King for permission to befriend her. After years of living with the Crown Prince, the two of them had for themselves two children. The girl named Qui, the son named Tri. 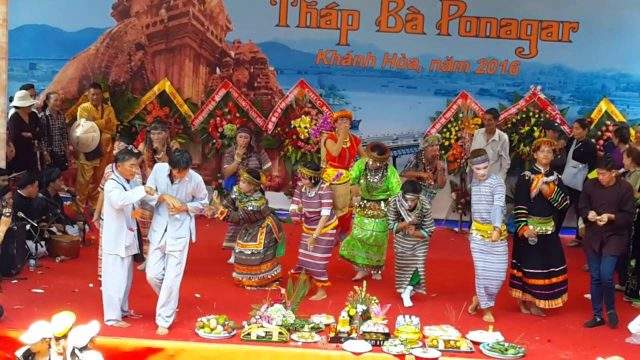 One day, Thien YA Na remembered her home town and adoptive parents at home. She then led her two children into the southern period, down to the sea to return home. When I arrived, my foster parents were gone. She built a grave for her parents, then renovated the house to have a place to worship grandparents. Returning here, she saw that the people in her hometown were still poor and miserable. litchi, rituals to be religious … from which the lives of the people will be more and more full and full.

One day, a large flamingo flew from the sky to bring her mother and daughter to heaven. Then people here to express their gratitude to her for sculpting and building the tower to worship.

Upon hearing the news that she and her two children flew to the Crown Prince, he was extremely angry because he thought that people had concealed her and his children immediately sent their victims to interrogate the people. Too unjustly, people here have come to the tower to burn incense. At that moment, from nowhere to a storm, everything shook and blew away the soldiers from the North. 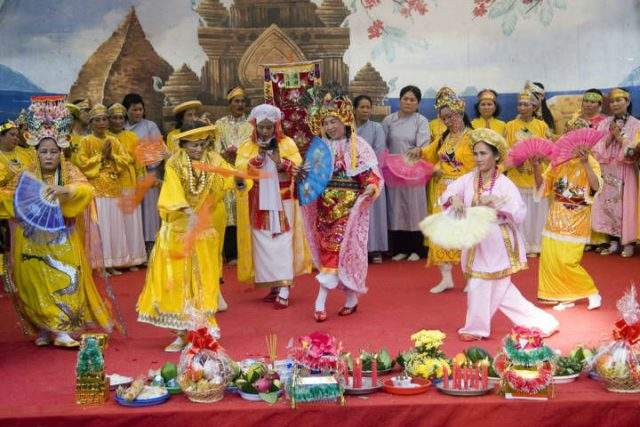 Many people speculate that the remaining rock clusters in front of the Tower in the Cu River are the old stones that have engulfed the convoy of ships and soldiers. This paranormal story was also recorded on stone steles and erected behind the tower in 1856.

Up to now, Ponagar Thap Thap festival is still held every year. This is one of the biggest cultural and religious festivals taking place every year in the Central region. Not only that, coming here visitors will be immersed in the air when playful of performances such as lion dance, ball dance, singing … extremely special is interesting. With stories about Ponagar Tower, this place makes it more mysterious and more attractive to visitors. For those who once visit, discovering this relic will surely be a memorable memory in the trip to discover Nha Trang.

Speaking of Nha Trang, almost everyone remembers the beautiful beaches stretching along this central strip of land and Bai Tranh is also one of...
Read more
Khanh Hoa

Traveling to Nha Trang is not only a blue sea, white sand, sunshine but also tourists can explore the beautiful mountains and Co Tien...
Read more
Khanh Hoa

Nha Trang double beach is one of the most unique beaches of this beautiful coastal city because in addition to the freshness, coolness of...
Read more