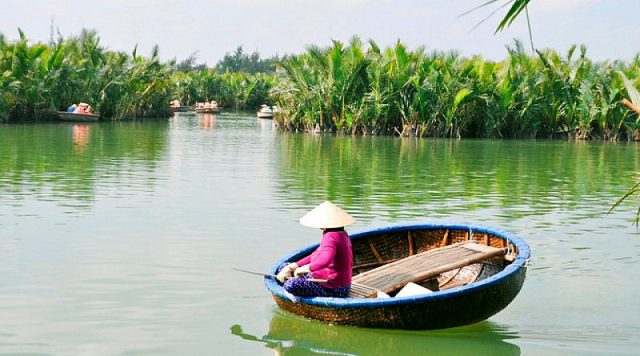 Traveling to Hoi An has never been hot with many historical preserved places, not to mention the Seven Mau Coconut Forest , a place that you will surely enjoy when exploring the beautiful landscape and also boating. It is a good idea to try the feeling of lightheadedness on the water.

Bay Mau coconut trees Cam Thanh Hoi An when put into exploitation tourism has become an attractive destination to visit. The reason for this name because in the old days, this forest had about 7 acres of free-growing coconuts. To date, the forest has grown to more than 100 hectares but it still retains the name of Bay Mau coconut forest because it is so familiar and dear to Hoi An residents and tourists . Because it is located right in the brackish water area, it is very suitable for developing coconut water. There are 2 ways to get here, from the ancient town of Hoi An you can go here by road or river are. If you go by boat, start from the pier on Bach Dang street, just near Hoi An market, you will follow the flow of Hoai River down to the East, about 5 kilometers to reach. If you go by road, you run alternately along Tran Phu route, go straight to Nguyen Duy Hieu, see the intersection then turn right to Tran Nhan Tong Street, go about 4 more kilometers to Cam Mau Coconut Bay Cam has appeared before your eyes friend. 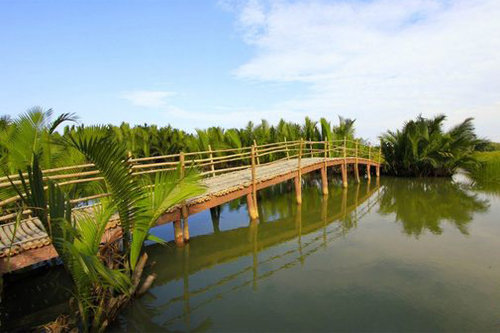 Here in the years of resistance against French colonialism and American imperialism has become a revolutionary base, helping our army to fight the enemy with many glorious victories. The local guerrilla forces relied on discreet terrain, many hidden places to organize many unexpected battles, even when our forces were too thin but the enemy was so many that we still defeated the The battle of the enemy, the enemy is equipped with more modern weapons, we have artillery, air force but still can not make us lose the battle. The typical battle in 1948, the infantry of the French colonialists with the support of tanks, attacked the Seven Mau Hoi An Coconut Forest to destroy all our armed forces. But fearlessly, the local guerrilla forces, thanks to the familiar terrain, organized a secret attack, clinging to the enemy, throwing grenades into the trunk of the car making the enemies extremely scared, having to abandon the battle. but turned back to Hoi An.

Because many times the sweeps failed, they forced the people of the surrounding communes to clear the entire forest so that we could no longer shelter, unable to ambush unexpectedly. However, they did not achieve as intended, after only a short time, the Coconut Forest flourished, green, causing their fights to fail miserably. After successfully winning and driving away the French colonialists, in 1954 when the Geneva Agreement was signed, Ngo Dinh Diem took over Quang Nam. They have caused many bloody carnage like in Vinh Trinh and Cho Duoc. And yet, they have constantly organized the raids of “To communist”, “to annihilate the communists,” to hunt down the Communist day and night. And during that time, the coconut forest helped senior officials of the Hoi An Town Party Committee, Quang Nam Provincial Party Committee to have a safe shelter and not be caught by them. 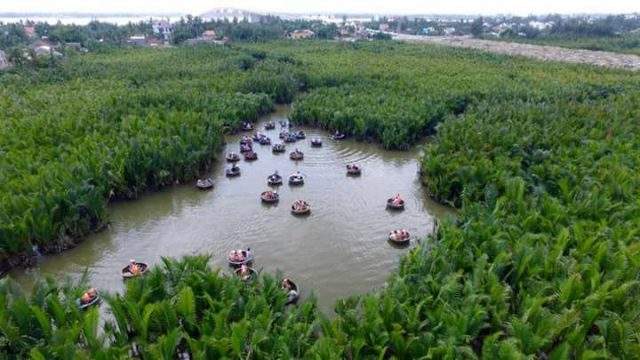 Bay Mau coconut forest goes into the history of the homeland as a death zone, burying the enemy (Photo ST)

In 1966, when the US imperialists brought troops to the South, they conducted many large-scale sweeps and the liberation zone of Cam Thanh with the enemy location set out of the Bay Mau Coconut Forest was among them. On June 13, 1966, they mobilized up to four mixed American puppet companies, including 1,000 men and 28 helicopters, to strike down the Cam Thanh area and the coconut forest. Not only equipped with modern weapons, they also received support from 5 machine guns mounted with guns and long-range cannon from the support of nearby posts. Yet in just 3 days of fighting, taking advantage of the terrain of the coconut forest, our troops organized many counter-attacks that broke through the raids of the enemy, destroyed many enemies, and caused great losses to the enemy. From 1967 until Hoi An won, many times guerrilla forces and soldiers had soaked in coconut forest, launched many surprise raids, making the enemy unable to take action, we defeated. The enemy’s air force, artillery, and boats were spectacular.

This place contributes to become a safe shelter, making Cam Thanh an important pedal of the East for our forces to attack the inner city of Hoi An with many glorious victories. Hoi An was completely liberated, ending 20 years of resistance war against the US to save the country and our people. Bay Mau coconut forest in Hoi An is a base that has entered the history of the homeland as a death zone, making graves and graves because there were too many enemy soldiers dead here. Although many defensive defenses of our army used to be no longer exist, the coconut trees still exist with intense vitality, agitation, and green development all year round as a mark of majestic and glorious victories of Army and people of Hoi An in the two wars of resistance against French colonialism and American imperialism. Coming here, visitors will be able to visit the forest on the boat in the Southwestern style. However, the distinctive feature to distinguish this coconut forest from the western river is that here people do not use means of transportation as common boats but use basket boat.

The basket boat is the main mode of transportation here (Photo: ST).

It comes to the basket boat. Visitors come here when wondering, curious will be the boatman’s explanation of the origin of this boat, when they have been, the reason why people use basket boat instead of normal boat … All The frequency of the questions you ask will be explained. Come here to experience the feeling of riding on this special vehicle and find yourself the answer. Each boat like this can carry 2-3 tourists (Photo: ST).

Experience is that you should go to about August lunar month, then you will admire the coconut groves are in season and enjoy coconut rice sprinkled with delicious stop Bui Bui. You should avoid going in November and December because the rains can make you trapped in the room can not enjoy the journey. Under the control of supple oars, the boat slowly moved into the depths of the Seven Mau Coconut Forest . The high green coconut palms whispering shadow printed water. On the trip, the boatman will pick coconut leaves to make funny natural ornaments such as hats, rings, glasses … extremely lovely for visitors. 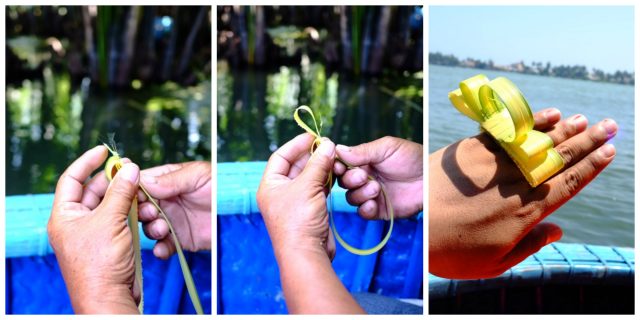 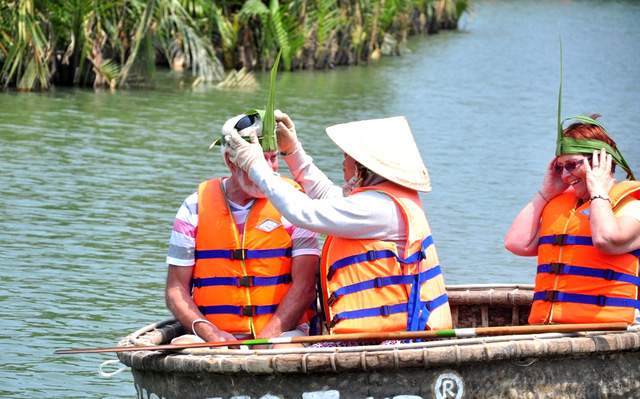 Just go along the quiet water, watch the immense green coconut groves, listen to the boat driver sing a Quang song or immerse yourself in the story of the resistance war through the warm and loving voice of the Central people. into an experience you never want to end. Thanks to the hidden terrain, Bay Mau coconut forest has been chosen as a base and associated with the glorious victories of the army – the people of Hoi An in two national resistance wars. Foreign guests are very interested in this souvenir (Photo: ST).

Propose to experience the feeling of driving the boat by the floating water, below is a flock of fish swimming around, on top of green coconut trees swaying in the wind; or join the “thrilling boat” circus show right on the river. 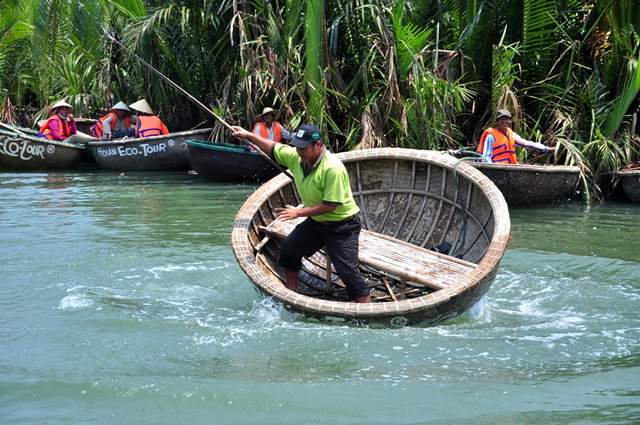 Previously, when visiting the coconut forest you will be free of charge but starting from December 1, 2017, Hoi An City has decided to approve the plan to sell sightseeing tickets so the Bay Mau Coconut Forest ticket price will is 30,000 VND / ticket / person. When buying a ticket, visitors will enjoy the landscape and ecosystem of the coastal estuarine area, visit the production and display area of traditional coconut and bamboo, watch the demonstration of fishing and many interesting activities. other, also use the toilet and make sure the security and order during their visit. The beauty of the seven-sample coconut forest (Photo: ST) 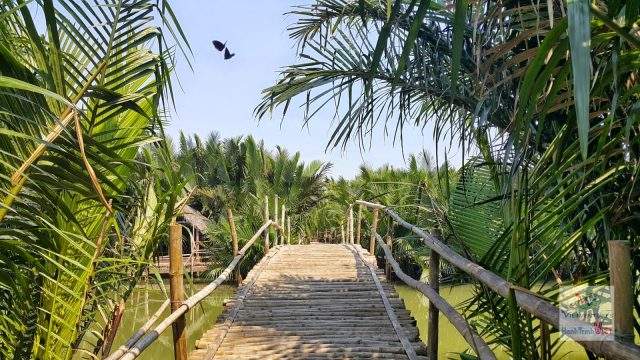 Compared to “The West in Hoi An’s Heart”, you will really have a very interesting experience for this trip to the Bay Mau Coconut Forest with what nature brings, with friendly people, you will enjoy when watching people show their talents on the basket boat, small but warm souvenirs, understanding more about the homeland, the country, people of Hoi An in particular and Vietnam in general. Let’s schedule a journey to discover Quang immediately and always!

Be calm to live and try to do what you like to everyday feel a Da Nang - Hoi An is both ancient and...
Read more
Quang Nam

Not only is Hoi An an outstandingly preserved old town but also a lot of new places to visit, Cam Nam Island is one...
Read more
Quang Nam

With the strongly developing tourism industry, the typical passenger transportation industry is Hoi An Taxi, which is well developed. Taxis are a very popular...
Read more